It’s widely known that Yoga can enhance your physical and emotional well being, but when Yoga is practiced with a therapeutic intention in the form of Yoga Therapy, it can help prevent and aid recovery from physical and mental ailments. Yoga has long been practiced with therapeutic intentions as way of transforming both the body and the mind. According to classical texts, most of the problems in our health come from a state of ignorance of who and what we are. By offering a vehicle for self-knowledge, yoga provides an opportunity to become acquainted with our essence, in tune with the Oracle at Delphi’s command: « Know thyself. » From a psychological standpoint, therapy is defined as the possibility of accessing self-knowledge that will enable us to change that what we consider dysfunctional. A number of research studies have proven the effectiveness of Yoga Therapy as developing exactly that type of awareness.

The applications of Yoga Therapy range anywhere from maintaining health, to recovering from illness – in some cases, even those considered incurable. The first stage of healing involves the movement of vital forces in the system. Practitioners of many Eastern forms of medicine believe that every illness involves a certain level of energy blockage. By promoting the flow of prana, or vital force, yoga combats those blockages, restoring the basic condition for health. Common applications for Yoga Therapy also serve structural problems such as spine misalignments or joint function. Deeper applications may even aid more intractable problems such as AIDS and cancer. By combining different techniques such as massage, stretching or alterations of the circulatory patterns, yoga promotes specific changes in muscles, joints and organs altering the vital functions of the body. A good example would be the way Yoga Therapy can help overcome panic attacks. By practicing a balancing breathing technique, a sense of control is gained, combating the fear and anxiety produced by its loss. Additionally, by practicing Tratak, a specific technique that involves eye movement, the pituitary gland is reset via the optic nerve, influencing the ‘fight or flight’ reaction so intimately related with the syndrome. 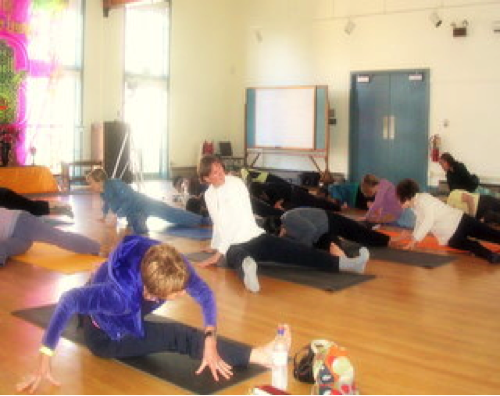